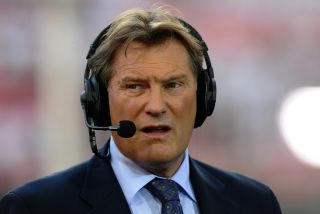 The former England boss spent two and a half years in charge at White Hart Lane between March 2001 and September 2003.

Tottenham are seeking a new full-time coach after the exit of Andre Villas-Boas, with Tim Sherwood currently in temporary charge.

And Hoddle is eager to return to a club where he spent much of his distinguished playing career.

He told Sky Sports: "Tottenham Hotspur Football Club – I supported them when I was eight years of age. I went there at 12, I left at 28, went back and managed. It's in my blood; it's in my bones.

"If I was offered the job, yes I would want to go back."

Hoddle would be happy to take the reins on a short-term basis if approached by the Tottenham board, but stressed that no talks had yet taken place.

"It's whatever is right for the football club and if they felt that they wanted me to go until the end of the season - and they wanted something else long-term, I would be prepared to do that, because I love the club," he added.

"They have not offered me the job, so it's all speculation."

The 56-year-old was keen to highlight the progress made at Tottenham since he last managed the club more than a decade ago.

"I think it's a different club completely. I had a squad that was ageing at the time. We were bringing free transfers in," he continued.

"This isn't the same scenario, the club at the moment. It's a completely different scenario to that. I think there's a way forward.

"(There is) a new stadium to be built, (and) they've got a squad that looks as if they have got some real talent in there. So it's completely different."