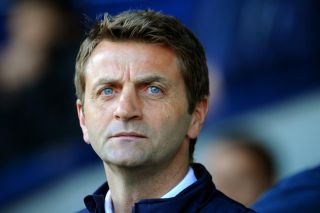 Sherwood only took the reins at White Hart Lane in December, replacing former incumbent Andre Villas-Boas, but it has been widely reported that he will be relieved of his duties when the current campaign ends.

Former Tottenham midfielder Hoddle - who had a two-year stint in charge of the club between 2001 and 2003 - believes the writing is on the wall for Sherwood, with the club not publicly backing the 45-year-old.

If Tottenham do dispense of the services of Sherwood, who has admitted he is in the dark over his future, Hoddle expects the London club's hierarchy to look further afield than England for his replacement.

Speaking to talkSPORT, he said: "I do believe that they'll bring someone in and I think they'll be working behind the scenes (to find a replacement).

"If Tim was going to keep the job they'd have come out and backed him. I think they'll go foreign."

Hoddle believes that Netherlands boss Louis van Gaal was a target for Tottenham, but thinks he may now be swayed by the Manchester United job after David Moyes was sacked this week.

He added: "I think on their radar was Van Gaal, but the Manchester United job has now become available and I that could appeal to him."

Hoddle also re-iterated that he offered to take the Tottenham job until the end of the season when Villas-Boas departed, and would consider taking over if the opportunity were to arise.

He said: "Well I did speak to Tottenham, they asked for advice and I gave it to them. I said if you want me to take over until the end of the season I'd do that. That club is in my DNA, so I'd definitely look at that (if offered the job)."