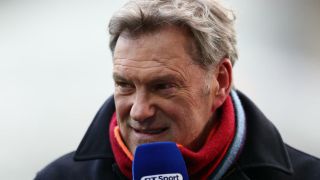 Former England and Tottenham manager Glenn Hoddle is "responding well" to treatment after being taken to hospital in a serious condition.

Hoddle, who turned 61 on Saturday, was preparing for work in his role as a television pundit for BT Sport when he collapsed.

"The condition is serious but Glenn is receiving specialist treatment and responding well," a spokesman said.

"Earlier today Glenn collapsed at the BT Sport studios - he received immediate medical attention on set and was transferred by paramedics to a hospital in London.

"His family are with him and would like to thank everyone for their support. They have also asked to respect their privacy at this time."

A club hero at Tottenham, where he spent the majority of a celebrated playing career before later becoming manager in 2001, Hoddle was capped 53 times by England and scored eight international goals.

We have received an update on Glenn Hoddle's condition this evening:"The condition is serious but Glenn is currently receiving specialist treatment and responding well."“Glenn’s family are with him and would like to thank everyone that has sent their support." October 27, 2018

The stylish midfielder also represented Monaco under Arsene Wenger before operating as player/manager at Swindon Town and Chelsea.

Hoddle's work at Stamford Bridge saw him appointed as Terry Venables' successor with England and he led a Three Lions side featuring David Beckham and Michael Owen to the last 16 of the 1998 World Cup.