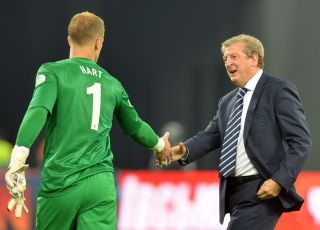 The 26-year-old fumbled a Franck Ribery effort into the net for Bayern's first goal in the UEFA Champions League fixture on Wednesday, before Arjen Robben beat him at his near post for the third.

Those errors have seen the shot-stopper once again in the spotlight ahead of England's crucial FIFA World Cup qualifying fixtures against Poland and Montenegro at Wembley, with only a maximum haul enough to guarantee their participation in next year's tournament in Brazil.

But Hodgson insists that he will retain faith in his regular number one.

"As far as I'm concerned, he's never let me or the team down in the time I've worked with him so I have every confidence, every faith in him that he will put it behind him.

"He kept clean sheets against Ukraine and Moldova, so it will take more than one bad game from any player for me to start suggesting that he should be replaced by anyone else.

"Especially at the moment when we need experience. We need players who are tried and tested at this level, who have played regularly at the top level.

"If you look at the goalkeepers we have available that fit that criteria he's clearly number one."

Hodgson also welcomed the return of strikers Wayne Rooney and Daniel Sturridge to his squad.

The duo were absent for England's last two World Cup qualifiers, a 4-0 victory against Moldova and a 0-0 draw with Ukraine.

Rooney missed those matches with a head injury, and he was also sidelined for Manchester United's 1-1 draw with Shakhtar Donetsk in the Champions League in midweek due to a swollen shin.

Sturridge was also unavailable last time out due to a hamstring problem, but the Liverpool man is also now pushing for a place in the starting XI.

He added: "Wayne didn't play for Manchester United last night but we are reliably informed it is not a serious injury and won't stop him joining up with us.

"The more choices I have, the better. I was excited before the last two games. I was watching (Daniel) Sturridge and Rooney and was thinking they were in great form.

"Unluckily, we lost them so hopefully this time we won't. (Rickie) Lambert is playing well and (Jermain) Defoe as well."