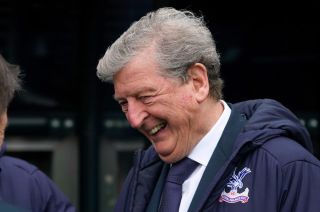 Roy Hodgson saluted skipper Luka Milivojevic after watching him fire Crystal Palace to the brink of Premier League safety with his 10th successful penalty of the season at Newcastle.

The nerveless Serbian midfielder beat Martin Dubravka from 12 yards with nine minutes remaining, after Wilfried Zaha had been tripped by DeAndre Yedlin, to clinch a 1-0 win which eased the Eagles to 39 points.

Asked if Milivojevic, who has missed only one of his 11 penalties so far during the current campaign, is as good as any he was worked with, Hodgson replied: “Yes, absolutely, yes.

“When the penalty was awarded – and I don’t really think anybody who watched the game had any serious doubts that it was a penalty – but still, 49,000 people are screaming and booing and doing their very best to put you off, and also what’s going through your head is, ‘If I score this, we go 1-0 up with only maybe 10 or 12 minutes left to play, there’s a great chance we’ll go home tonight with three points and that will take us to 39, which is pretty much safety in our eyes’.”

Palace had to withstand significant pressure before Milivojevic got his chance to win the game as Newcastle squandered a series of chances, with leading scorer Salomon Rondon unusually profligate.

However, the visitors defended with real tenacity to secure a seventh league win of the season on the road, three more than they have managed at Selhurst Park.

Hodgson said: “It was a very important game, hard-fought, but I thought that I could be very, very proud of the team’s performance.”

Opposite number Rafael Benitez admitted his side’s failings in front of goal had cost them, but was as disappointed by the way they were caught on the counter-attack as Zaha won the decisive penalty.

Benitez said: “I think we did enough to deserve three points. We had chances, we were attacking, we were controlling them for a while. We knew that they were dangerous on the counter-attack, but we had control of the game in everything, and we made a mistake and we paid for that.”

Benitez’s pain was compounded by the loss of defender Florian Lejeune to a potentially serious injury to his left knee, just three months after his return from cruciate ligament damage to the right.

The Newcastle boss said: “It seems bad. It’s the other knee but it seems bad, so we have to wait and see what the doctor says tomorrow.

“I was talking with him. Obviously he was disappointed and asking the doctor. We need to assess him tomorrow but it seems bad.”

Meanwhile, Benitez played down talk that his comments over his contract negotiations during the build-up to the game had suggested a deal was close.

He said: “No, the same situation as yesterday.”