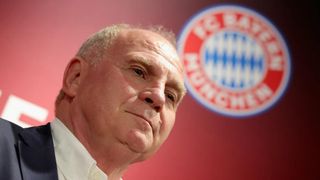 Ligue 1 holders PSG tried to sign Germany international defender Boateng from Bayern but a deal never materialised before the transfer deadline, while Renato Sanches also reportedly emerged as a target.

PSG's pursuit – led by Henrique – left a sour taste in the mouth of Hoeness, who was scathing of the French club's sporting director.

"I would advise PSG to replace their sporting director. The man is not a great advert for the club," Hoeness told Kicker.

"PSG cannot afford to have such a sporting director if they want to be one the best clubs in the world."

Back from Stuttgart and on go the Lederhosen More from the Paulaner photo-shoot on today's  September 2, 2018

Hoeness added: "We asked for this fee [€50million] because we did not want to hand over Jerome and assumed that Paris would not pay that amount. We also wanted to do our coach a favour because he wanted to keep the player."

Bayern's sporting director Hasan Salihamidzic was also less than impressed with Henrique and PSG's actions during discussions for Boateng.

"I do not want to insult anybody. But I will tell you: You can't do things like that to Bayern Munich Especially when it is about that kind of player," Salihamidzic told Sky following Bayern's 3-0 win over Stuttgart on Saturday.

"If a transfer shall happen, many things must fit. We must want it, the player must want it and the other club should show interest in that player. And we never felt that in any moment.

"Even Jerome confirmed to me, that the tactics of the other side were strange."