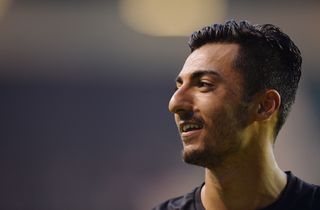 The 22-year-old captained the club to the Allsvenskan title this season, which they clinched with a 2-0 win over Elfsborg on Monday.

Hamad made 27 appearances in the club's successful campaign, scoring eight times, and will move to the Rhein-Neckar Arena in January in a deal that will keep him at the club until 2017.

Hoffenheim's sporting director, Alexander Rosen, believes Hamad can improve as a player while at the club.

"Jiloan Hamad is a young, ambitious player who can still develop, and he has already underlined his ability in Sweden," Rosen told the club's official website.

"He can play in a variety of positions across the midfield and we're delighted that he's decided to join us."

Hamad joins a side currently ninth in the Bundesliga and could make his debut in the first game after the winter break, when Hoffenheim travel to Nuremberg on January 24.