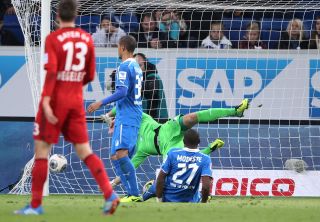 The Bundesliga outfit were considering legal action, after their initial appeal to restage their fixture with Sami Hyypia's side was turned down.

Leverkusen won the fixture 2-1 on October 18, after a controversial goal was awarded to Stefan Kiessling, with his header ending in the net via a hole in the side of the goal.

Referee Felix Brych failed to spot the incident, prompting Hoffenheim to request the match be replayed, but their plea was turned down.

Despite reports that they would take the ruling to an appeal, the club have decided to accept the decision, as they feel further action would not be worthwhile.

"After intensively thinking about it, we decided not to elevate the judgement," chairman Peter Rettig told the club's official website.

"This decision does not change the fact, that we consider this judgement by the court a wrong signal for football in general.

"Nevertheless we have decided to accept the judgement, as we do not want to get involved in something that is clearly hopeless."

Director of football Alexander Rosen added: "If we had only seen a slight chance we would have continued the legal process.

"That there is no way in the system we have, is something that was unfortunately made clear in the days preceding the negotiations. What remains is a bad aftertaste."