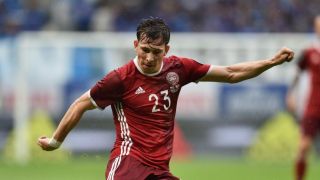 Pierre-Emile Hojbjerg is set to be confirmed as a Southampton player this week, as he nears the Bayern Munich exit door.

Hojbjerg stated his desire to leave the Bundesliga giants ahead of next season in May, having spent the 2015-16 season on loan at Schalke.

German media suggest a €15million deal has been agreed between Saints and Bayern, with the midfielder's agent confirming the move to Danish publication Ekstra Bladet.

Hojbjerg will help fill the gap left by Victor Wanyama's move to Tottenham, as Claude Puel looks to build on the fine work done by Mauricio Pochettino and Ronald Koeman at St Mary's Stadium in recent seasons.

Koeman broke Pochettino's record for leading Southampton to a record tally of Premier League points in his first season, before raising the benchmark higher en route to a sixth-place finish - another club best.