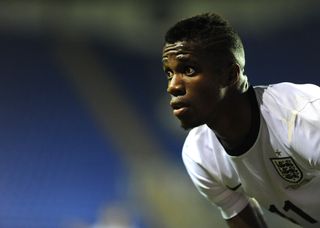 Winger Zaha joined Manchester United from Palace at the start of this year and was immediately loaned back to the London club, playing a major part in their promotion to the Premier League.

The highly-rated England Under-21 international has since endured a frustrating start to his Old Trafford career, making just one appearance in the Community Shield for David Moyes' side.

Zaha's lack of first-team football has led to reports that he could be sent out on loan again, but Palace boss Holloway has all but ruled out welcoming the 20-year-old back to Selhurst Park during the January transfer window.

Holloway told the South London Press: "David Moyes has his own issues at Manchester United, so if we were to go shouting about wanting him back on loan, I don't think we will ever get him back.

"Besides, we have options (on the wings) - Jason Puncheon can play either side and in the pocket as well as in central midfield.

"Yannick Bolasie is coming back and will do well. It is all about having a squad that is strong enough to make changes and sustain good performances.

"At the moment, we are not beating people. (Jimmy) Kebe might have the chance to do that. And we know Jerome Thomas can."