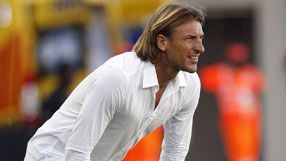 Renard, 44, who led Zambia to the African title a year ago and is now preparing for Friday's heavyweight clash against Nigeria, told reporters that his tactical gamble for a second goal when his side were leading 1-0 on Monday did not pay off.

The usually unflappable and pragmatic coach played his hand with 30 minutes to go and with his side leading through Collins Mbesuma's first half strike.

He then switched midfielder Chisamba Lungu to leftback and it was Lungu who was caught out of position when team mate Hichani Himoonde made a mistake that allowed Saladin Seid the space to set up Adane Girma's equaliser five minutes after the tactical switch was made.

In a refreshing admission other coaches could do well to copy, Renard said on Thursday: "I will be very honest with you.

"The fact we drew against Ethiopia was my fault. I took the risk to score a second goal and I removed one defender [Musonda] and put Chisamba Lungu at left-back and that was 100 percent my mistake.

"I am not someone who will hide their faults. The players did their best. It was not easy to play on that pitch because there is too much sand in the ground, but it is the same for all four teams. I am not making any excuses though.

"I took the risk and the risk did not pay off. When I watched the video of the game I realised I could not put the blame on anyone else, it is too easy to do that.

"My strategy failed because we did not score and we conceded a goal on the side I made the substitution. I am protecting my players. I wanted more, I wanted to make the break for the second goal, but I failed."

Despite that, Renard said he did not feel under any more pressure in his job than usual, even though there is huge expectation among Zambian fans that they can retain their title here.

"No, I don't feel under pressure. We may be African champions, but I think it is far better to have won something in your life than run behind the title all your life and never win anything."

The four teams in Group C, Zambia, Ethiopia, Nigeria and Burkina Faso, all have one point from their opening games.