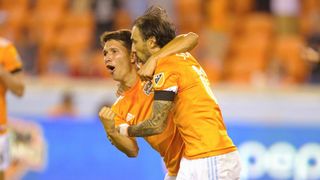 Dynamo scored twice in 14 second-half minutes as the hosts rallied to beat Sporting KC in Houston on Wednesday.

Occupying second spot in the Western Conference, Sporting KC took the lead just past the half-hour mark when Jimmy Meranda scored with the outside of his foot from outside of the penalty area.

But Houston hit back after the interval thanks to Tomas Martinez and Erik Palmer-Brown's own goal.

Martinez equalised in the 63rd minute with a powerful volley before Palmer-Brown turned the ball into his own net.

Dynamo are now fifth in the west, three points clear of sixth-placed FC Dallas and two adrift of Sporting KC.