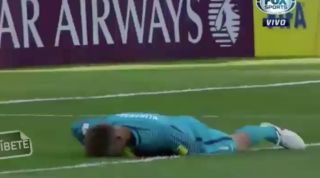 Team USA are currently playing at the U20 World Cup in South Korea, and opened their campaign against Ecuador on Monday.

But with the score at 2-2 in the 63rd minute, Klinsmann made a costly double mistake that would make Manuel Neuer grimace.

First, the 19-year-old tried to dribble around an Ecuador forward, only to lose control of the ball. He then had the chance to make up for his error as he looked to retain control, but instead of hoofing it clear with two attackers on him, Klinsmann elected to try passing the ball out instead.

It was intercepted, of course, allowing Bryan Cabezas to grab his second goal of the match. Luckily for Klinsmann, Fulham's Luca de la Torre struck a last-gasp equaliser and the match ended 3-3.