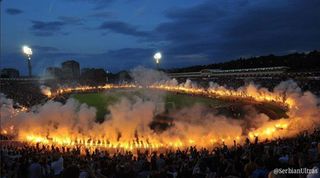 Partizan Belgrade confirmed their title victory after beating Mladost Lucani 5-0 in front of 33,000 fans in the packed-out Partizan Stadium on Sunday evening.

The victory was made all the sweeter by the fact they beat fierce city rivals Red Star to the title by three points.

With the SuperLiga secured, fans produced an incredible light show with flames, forming a powerful ring of fire around the pitch as pyrotechnics lit up the sky.

The celebrations continued on the streets as fireworks were let off and flares lit along the victory parade towards Terazije Square and the Serbian Presidency building.