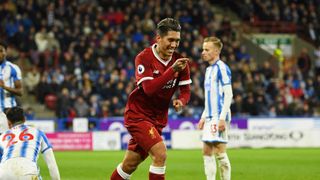 Liverpool put back-to-back defeats behind them as Emre Can, Roberto Firmino and Mohamed Salah secured a routine 3-0 win at Huddersfield Town.

The glow of the Reds' stunning 4-3 win over Premier League leaders Manchester City earlier this month quickly faded as a loss at lowly Swansea was followed by West Brom arriving at Anfield to ransack Jurgen Klopp's FA Cup bid at the weekend.

Klopp, who benched record signing Virgil van Dijk, initially looked like he would get few favours out of close friend David Wagner and Huddersfield until Can's deflected drive broke the deadlock after 26 minutes.

Firmino caught out Town goalkeeper Jonas Lossl in first-half stoppage time, leaving a mountain that the hosts seldom looked like scaling before Philip Billing clumsily fouled Can in the box and Salah dispatched his 26th goal of the season in all competitions.

It proved to be a profitable night with regards to Liverpool's Champions League ambitions as Arsenal went down 3-1 at Swansea City, while Klopp can look forward to the prospect of Manchester United and Tottenham taking points off one another on Wednesday.

Huddersfield adopted the deep-lying but energetic defensive approach that almost bore fruit against Manchester City in November and Liverpool were frustrated in their bid for clear chances during the opening 15 minutes.

It was the hosts who fashioned the first clear sight of goal when wing-back Chris Lowe galloped down the Liverpool right and crossed for Laurent Depoitre, who failed to catch his shot cleanly and Loris Karius saved well.

The heavily protected Lossl got down to keep out an awkwardly bouncing strike from Can but he had no chance when the same player's venomous drive clipped Billing and flew into the bottom right corner.

A raucous home crowd's backing for their team did not waver and Lowe almost raised the roof five minutes before half-time when his free-kick curled just wide after Sadio Mane brought down Town captain Jonathan Hogg.

But Wagner's men were forced to absorb a sucker punch on the stroke of the interval when Firmino made light of an acute angle to squeeze a clever finish between Lossl and his upright.

Huddersfield still showed little inclination to operate outside their own half for too long and Mane might have done better when he headed Can's searching cross at Lossl.

The same combination almost succeeded in the 69th minute, with Can launching the ball over the top from midfield and Mane powering a diving header wide.

It was then Salah's turn to be wasteful in front of goal by prodding into the side-netting having scooted around Lossl.

That miss did not discourage the Egypt star when Kevin Friend pointed to the spot 12 minutes from time and Salah sent the Lossl the wrong way – also the direction in which Huddersfield's season is heading.

Winless in seven, they are 14th and only a point above the relegation zone in an increasingly congested fight for survival.