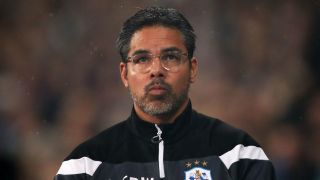 David Wagner conceded Huddersfield Town were "not good enough" and played like a promoted side as they slipped to a first Premier League defeat at West Ham.

The Terriers were unbeaten heading to London Stadium as the only top-flight team yet to concede in the league this season.

But they went down 2-0 after goals in the final 20 minutes from Pedro Obiang and Andre Ayew and Wagner took little issue with the result, conceding the hosts were good value for their win.

"We were not good enough," he told Sky Sports. "It was a deserved result. We were second best, more or less, in every area.

"Maybe the second half was slightly better. Our biggest problem was that without the ball we fought to keep the ball out of the goal, but with the ball we were not good enough. We lost the ball too easily.

"I'm unsure if we were nervous. Today, we looked like a promoted team. We have showed some nerves with the ball. My players can play football and today we've not shown it.

"We have to be brave with the ball and we made so many unforced errors."

"We weren't quite at it today," he said. "The manager stressed at half-time that we weren't brave enough with the ball and that showed.

"We are very disappointed. I don't think on the whole we were as good as we can be."