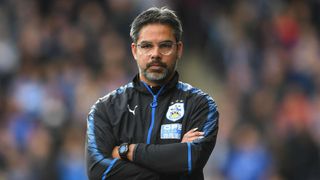 David Wagner felt Huddersfield Town were denied a "clear second goal" as his side were held to a 1-1 draw against Leicester City.

After an uneventful first half, Laurent Depoitre marked his first Premier League start with a cool finish to put the Terriers ahead in the 46th minute, only for Jamie Vardy to hit back from the penalty spot shortly after.

Huddersfield had the ball in the back of the net again, but Elias Kachunga was judged to be offside when he flicked home a header from Zanka's strike.

Replays suggest that Kachunga's foot may have been just in front of play, though Town boss Wagner felt the linesman made the wrong call.

"I'm disappointed with a point. It was a harsh decision from the linesman because it was a clear second goal we scored," he told BBC Sport.

"It was a great team effort and a good performance. It was high intense football against a top-quality side.

"I am massively disappointed we had this wrong decision that was an important one. From my point of view it is clear he is onside."

DW: "I'm not happy with the result, because we scored a clear second goal and the players deserved to win" (DTS) September 16, 2017

Depoitre's goal was part of a wider solid performance on his maiden league start and Wagner was happy with what he saw from the striker.

"He played very well. He has a good fighting attitude and had good movement," he added. "He has done exactly what we expected and what we wanted to see from him.

"It gives us a lift that we have another striker."

Leicester boss Craig Shakespeare conceded that the Foxes, who had lost their previous two matches, were perhaps fortunate to escape with a draw.

"We have to look at it as a good point. I thought we were second best, especially in the first half," he said.

"Huddersfield did to us today what we normally do to teams. We were off the pace. To come away from a hard place and get a point was pleasing.

"I think we've played better this season and got nothing for it. Sometimes you do that but as a team collectively we have to be pleased."