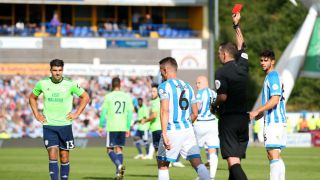 Huddersfield's home form proved vital to their survival last term, but the Terriers - who conceded nine goals over the course of their opening two fixtures - lacked the clinical edge to overcome Cardiff's stubborn rearguard in the first Premier League meeting between the two sides.

And just as the hosts had started to click into gear in the second half - Neil Etheridge having denied Steve Mounie an opener - Hogg's rash headbutt on Harry Arter handed Cardiff the impetus with 63 minutes played.

Cardiff could not craft an opening despite their numerical advantage, though, substitute Jonas Lossl pulling off a fine stop to deny Danny Ward a winner.

Both teams suffered injury blows early on - Ben Hamer's chance to atone for a poor display against Manchester City cut short following a collision with Nathaniel Mendez-Laing, who was taken off on a stretcher.

Huddersfield settled soon enough, but Terence Kongolo's strike into the side netting was all the hosts could muster as Etheridge remained untested heading into the break.

Etheridge was called into action after the restart, however, reacting sharply to prevent Mounie's effort creeping in at the near post.

But Huddersfield's hopes of making their dominance pay soon took a hit when their captain received his marching orders following a tussle with Arter.

Cardiff looked set to clinch the points late on, but Lossl marked his return to action with a superb stop from Ward's close-range strike to secure a share of the spoils.

What it means: Tame Terriers a worry

Aaron Mooy's return provided a timely boost for the home side, but the midfielder struggled to spark the creativity needed to open up Cardiff's well-drilled defence, and it seems that goals are going to be hard to come by for Wagner's side, who failed to register a single shot on target until the 51st minute.

Pat on the back: Excellent Etheridge vital to Cardiff

Cardiff's goalkeeper was not required to keep out a spot-kick in West Yorkshire, as he did against Newcastle United last time out, but he was at his best when called upon early in the first half, doing well to keep out Mounie's header with what was the first save he had to make.

Boot up the backside: Hogg headbutt sets Huddersfield back

The Terriers were in the driving seat early in the second half, but Hogg's headbutt on Arter - who was far from innocent - was needless. Huddersfield lack bite in the final third, and Wagner must find a way to channel their aggression correctly.

It's a switch to the EFL Cup for both of these sides next time out, with Huddersfield taking on Stoke City while Cardiff host Norwich City before clashes against Everton and Arsenal respectively when the Premier League returns.