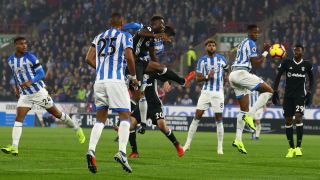 Fulham replaced Huddersfield Town at the bottom of the table as the Terriers' first home goal of the season gave them a 1-0 win in a clash of Premier League strugglers.

Huddersfield had gone 658 minutes without a home league goal, Tom Ince the last man to find the net at the John Smith's Stadium back in April.

However, a Timothy Fosu-Mensah own goal ended that barren spell in the 29th minute, and Fulham rarely looked like mounting a response as Huddersfield claimed a first win of the campaign.

Andre Schurrle did find the net for the visitors, but only after Aleksandar Mitrovic had strayed offside, the linesman correctly flagging as Fulham slipped to a deserved defeat that will intensify the pressure on head coach Slavisa Jokanovic.

FULL-TIME Huddersfield 1-0 FulhamTimothy Fosu-Mensah’s own goal gives their 1st win of the season - on the 3rd anniversary of David Wagner’s appointmentNovember 5, 2018

Only the woodwork denied Huddersfield an opener as Philip Billing's rasping left-footed drive clattered against the crossbar.

Steve Mounie headed over from close range before a deflected Alex Pritchard effort forced Sergio Rico to turn behind, but the deadlock was broken shortly afterwards.

Fulham failed to clear the second of two successive corners and Christopher Schindler took advantage by glancing a header into the bottom-right corner, though the last touch was adjudged to have come off Fosu-Mensah.

Florent Hadergjonaj was fortunate not to concede a penalty when he appeared to pull down Denis Odoi at a free-kick, though Huddersfield had an appeal for a spot-kick of their own waved away when Hadergjonaj was felled by Ryan Sessegnon.

Pritchard flashed a half-volley over in a second period of few chances, Schurrle seeing his fine finish at the other end chalked off as Fulham were condemned to a fifth straight league defeat.

What does it mean? Pressure piles on Jokanovic

Jokanovic was already facing questions over his future before this limp showing and calls for Fulham to opt for a change in the dugout are only likely to intensify after a startlingly lifeless performance.

He could have given away a penalty and also had an argument for winning one, but not in doubt was the influence Hadergjonaj had with his energy down the right. He was at the heart of some of Huddersfield's best attacks in the first half.

Without a club goal since September 22, Mitrovic, a £22million signing from Newcastle United, cut a frustrated figure as Fulham failed to threaten the Huddersfield goal, his exasperation encapsulating the Cottagers' plight.

Huddersfield have what looks another very winnable home game against West Ham on Saturday and will look to climb out of the bottom three. Fulham will attempt to do the same in the much more daunting surroundings of Anfield against Liverpool a day later.