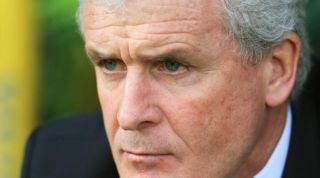 Marriner has come under the spotlight in recent weeks, in particular for his error in sending off Kieran Gibbs instead of Alex Oxlade-Chamberlain during Arsenal's 6-0 defeat to Chelsea last month.

He was at the centre of the action again on Saturday at the Britannia Stadium as he dismissed Stoke captain Ryan Shawcross for a second booking just after half-time, following a coming-together with Tottenham goalscorer Danny Rose.

Hughes claimed that the decision was harsh, attributing what he felt was a poor performance from the official to a lack of confidence.

Asked to comment on the sending off, Hughes said: "It's a long ball, Ryan's travelling at speed, he's got the flight of the ball and he's trying to get there. Obviously Rose is a quick player and he just got in front of him. It's a foul, clearly a foul, but that's all it is.

"The referee played on initially for five-to-10 seconds and then brought it back and deemed it worthy of a yellow card. So whether or not he'd forgotten that he'd already booked him (Shawcross)... which for a senior referee is a little bit poor.

"He should have had time to realise it was a second yellow, and to then send him off I think is rather harsh on Ryan and ourselves to be perfectly honest.

"I've been involved in games with Andre Marriner for many seasons and he's a top referee, but I thought here his performance was really poor.

Hughes also felt that Rose was lucky to stay on the pitch after an angry confrontation with Geoff Cameron, in which he pushed the Stoke player away.

"The boy Rose raises his hands, two hands, and everybody knows it's a clear, straight red and he (Marriner) gives a yellow card," the home boss added.

"The top and bottom of it is that we put in a fantastic performance, under difficult circumstances.

"I thought we were absolutely magnificent to a man, and the crowd responded to what they saw on the pitch.

"They understood we needed the backing and they responded to what they saw.

"The sound in the stadium was something special today. I was really proud of everybody connected with Stoke City."