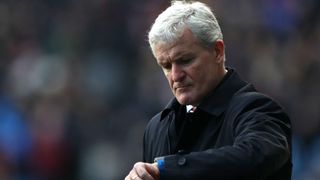 Mark Hughes' Stoke City future was left hanging by a thread following Saturday's shock FA Cup loss to Coventry City, but the Welshman insists he "can take the pressure" and turn things around.

Speculation is rife that Hughes will be sacked following the 2-1 defeat at the League Two club, though the 54-year-old spoke as if he would be afforded another chance to prompt a revival.

Jack Grimmer's goal proved decisive to compound the woes of a club languishing 18th in the Premier League, leaving the under-fire Hughes with no place to hide.

"It's clearly a difficult time for us," he said in quotes reported by BBC Sport. "When we make mistakes, they're getting penalised.

"We're not giving ourselves the right defensive platform at the moment and when that happens you're always vulnerable.

FT: The Potters crash out of the after falling to defeat against League Two at the Ricoh Arena (2-1) January 6, 2018

"Clearly, the only way to quieten down the noise around the club is to win games. We need to turn it around and quickly.

"We're good enough in this league – we've proved it during my tenure – but we've got to be better in key moments.

"We're all under pressure. I can take the pressure and the focus. I'm not naive and I realise people will talk about my position.

"But we've got good owners who will make the right decisions for the club. They have done before and they'll do it again."

Hughes took the Stoke helm in 2013, having had spells in charge of the Wales national team and Manchester City, among others.