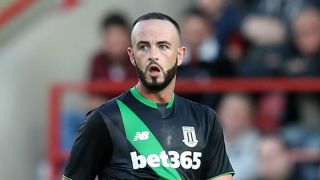 Mark Hughes says he may be forced to make a late bid for a centre-back after Marc Wilson sustained a knee injury that could keep him out for 12 weeks.

The Republic of Ireland international suffered the suspected medial ligament damage in Stoke City's 1-0 FA Cup fourth-round defeat at Crystal Palace on Saturday, which could hinder his chances of selection for Euro 2016.

"Marc looks like he's got a bad knee injury," Hughes told reporters after the match at Selhurst Park. "He's got medial ligament damage, the physio thinks, so he's going to be out for a period of 10 to 12 weeks, unfortunately.

"The injury might force our hand [in the transfer market] because we are bit threadbare with Ryan Shawcross injured, Geoff Cameron unavailable and Marc Muniesa only just coming back into the team.

"So we might have to do a short-term thing."

Hughes will have to act quickly, with the transfer window set to close on Monday, but admits he is at a low ebb following two cup exits in the space of a week - Stoke having suffered League Cup semi-final heartbreak at Liverpool on Tuesday.

"I thought Jakob Haugaard came in to good effect and he obviously had no chance with the goal.

"It was poor from our point of view. We didn't really affect play on the edge of our box.

"We got a bit of momentum second half and I thought we were the better team first half.

"We chased the game somewhat and that played into Palace's hands because they are very good on the counter-attack.

"They got people on the ball and looked to release [Wilfried] Zaha when they got the ball.

"We didn't really have enough in the final third when we had opportunities."