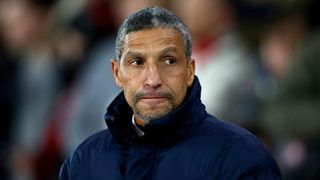 Brighton and Hove Albion manager Chris Hughton issued his players with a rallying call after a 1-1 draw at Southampton, asking them to "show a little bit more" as the Premier League relegation battle intensifies.

Glen Murray gave Albion the lead with a penalty after 14 minutes, but Jack Stephens netted his second goal in as many games to level matters in the second half.

The result left Brighton one point above Southampton, who sit inside the relegation zone along with Swansea City and West Brom.

"I think we were well worthy of the point that we've got," Hughton told the club's official website.

"When you come here, with the way that they play and the players that they've got, you'd expect them to have good possession and threaten.

"But I think we restricted them to one half-chance or so. We had a lot of the ball and threatened ourselves, and we were resilient in what we did.

"Probably on the balance of play, especially with us being the away team, I thought a draw was a fair result."

Brighton are without a win in their last six league games - a run that extends back to a 1-0 victory over Watford on December 23rd - and Hughton urged his charges to raise their game to avoid getting sucked towards the drop zone.

"This is the time for players to step up, and it's becoming quite obvious that going into this last third of the season, it's going to be the team that stands out from the rest," he said.

"Whether that's resilience and scoring the odd goal, or being able to turn defence into attack and go on to win games.

"Whichever way it is, there’s got to be those teams that show a little bit more than the others."

Southampton manager Mauricio Pellegrino told BBC Radio Solent Sport that his side were not the only ones facing a battle to find their best form.

The Saints are without a win in 12 Premier League games, but Pellegrino said there were signs of improvement from his players.

"We were really close to scoring the second," he said. "The good thing in football is you get another chance.

"Our performance dropped in recent weeks which was a pity, but football is like this.

"There are 10 teams, more or less, separated by five points and every team has problems because the competition is really tough.

"Our position is difficult but I think we are growing. Everyone is fit. The mentality is good. We tried but sometimes the opponent is really difficult."