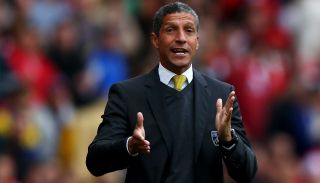 Norwich climbed out of the Premier League's relegation zone by coming from behind to win 3-1 against West Ham before the international break.

That result ended a winless run of five matches - in which they had shipped 18 goals and were embarrassed 7-0 by Manchester City - and eased the pressure on Hughton.

And ahead of Saturday's trip to Newcastle United, Hughton is hopeful his side can now go on a winning run.

"It was great to see the reaction to the Manchester City defeat against West Ham," said Hughton, who managed Newcastle from June 2009 to December 2010.

"St James' Park is a great place to go and play football. We have to go there with a philosophy to get something from the game."

Getting a result will not be easy, with Newcastle fresh off wins against Chelsea and Tottenham, helping them rise to ninth in the table.

Norwich will again be without Netherlands striker Ricky van Wolfswinkel, who has scored just one goal since crossing from Sporting Lisbon for £8.5million in June.

"There are no fresh injuries, but Ricky van Wolfswinkel will miss out again this weekend," Hughton added.

"It's not a serious injury for Ricky, but it's a toe injury that is taking time to heal fully. Thankfully, there are no problems with any of the lads who have been on international duty."

Norwich defender Ryan Bennett was recalled to the starting side following the loss at the Etihad Stadium and says everyone at the club is in a positive frame of mind as they look to move clear of danger.

"We're a team that never gives up, and we're looking up the table now," Bennett said.

"It was nice to get back in the team and get a win. It's up to me to stay there now."