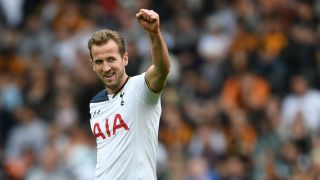 Harry Kane scored a hat-trick to wrap up the Premier League Golden Boot as Tottenham ended an impressive campaign with a 7-1 thrashing of relegated Hull City.

Mauricio Pochettino's men were unable to keep pace with champions Chelsea, but end the season with 86 points, by far their best tally in the Premier League, beating their previous record by 14.

Kane had jumped past Romelu Lukaku and Alexis Sanchez in the top-scorer stakes with four goals against Leicester City on Thursday and fended them off with back-to-back trebles to finish the campaign on 29 league goals.

Spurs' goals summed them up at their flowing best with Dele Alli, Victor Wanyama, Ben Davies and Toby Alderweireld all joining Kane on the scoresheet to subject City to their heaviest Premier League defeat.

A Spurs side that has begun to hunt records and trophies will have been put out by Sam Clucas' goal, which denied Hugo Lloris a share of the Golden Glove award with Chelsea's Thibaut Courtois.

The home fans at the KCOM Stadium were not given much to cheer on the pitch but spent the vast majority of the game serenading head coach Marco Silva, whose revival of the Tigers has just fallen short.

Hull fans began the match in fine voice, pleading with Silva to remain in Humberside, but they were swiftly silenced as teenage left-back Josh Tymon coughed up possession and the ball was worked for Kane to lash home left-footed from the edge of the box.

Tymon was once again the target as Spurs doubled their lead within two minutes, Eric Dier chipping over the 17-year-old to find Kieran Trippier, whose cutback was gleefully tapped in from four yards by Kane.

The double strike sapped momentum and volume from the contest, but a coiled Spurs attack struck again three minutes before the break as Oumar Niasse was robbed of possession and Alli checked across his man before picking out the bottom-right corner.

Having thrashed Leicester 6-1 in midweek, Spurs seemed content with their lot at the start of the second half, but Clucas' deflected strike beating Lloris only served to reawaken them.

Alli clipped a gorgeous ball over Hull's defence that Christian Eriksen could not squeeze past David Marshall, but Wanyama was given the freedom of the six-yard box to head the Dane's set-piece home.

Spurs were beaten 5-1 by relegated Newcastle United on the last day of last season, but this vintage is far more ruthless and Kane had his crowning moment as he was sent clear and finished with a calmness befitting the league's most lethal marksman.