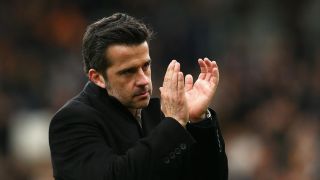 Hull City have confirmed that Marco Silva has resigned as head coach following the club's relegation from the Premier League.

The 39-year-old, who succeeded Mike Phelan at the KCOM Stadium in January, had been widely expected to leave the club after their drop into the Championship was confirmed with a 4-0 defeat to Crystal Palace.

It is reported that Silva's contract contained a clause that would allow him to leave if Hull were relegated and the club announced on Thursday that he had informed them of his decision to move on, despite being offered a new deal.

"The club can announce that Marco Silva has opted to leave his position as head coach," a Hull statement read. "Confirmation had been delayed due to finalising the terms of his release.

"Marco was offered the opportunity to continue the work he has done in the four and a half months he has been at the KCOM Stadium. Unfortunately, after considering his future, he has chosen to leave in order to further his career and departs along with assistant head coach Joao Pedro Sousa, first team coach Goncalo Pedro and goalkeeping coach Hugo Oliveira.

"Although disappointed by Marco’s departure, we would once again like to place on record our appreciation of his efforts and those of his support staff. Despite only being in charge for a short period of time, the 39-year-old became a firm fans' favourite and will be forever remembered for his efforts to maintain our Premier League status.

"The club will now undertake a thorough and considered recruitment process to appoint a replacement."

Hull vice-chairman Ehab Allam told Sky Sports News on Thursday that Silva, who has been linked with Crystal Palace and Watford in recent days, was "a better calibre of manager than the Championship and wants to manage in the Premier League or at a top European club".

Palace are looking to replace Sam Allardyce, who resigned this week, while Watford have not yet found a successor to the sacked Walter Mazzarri.

A return to Portugal has also been suggested for the former Sporting CP boss, with Porto linked with an offer after parting company with Nuno Espirito Santo on Monday