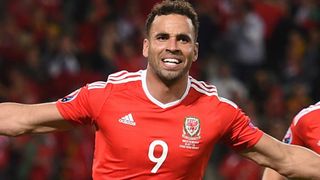 Hull City manager Steve Bruce says he is looking to sign Hal Robson-Kanu as the club prepare for life back in the Premier League.

A 1-0 win over Sheffield Wednesday in the Championship play-off in May saw Hull promoted back to the top-tier of English football after just a one-year absence.

Bruce has now set his sights on Robson-Kanu, who is a free agent after leaving Reading - the club he joined as a 15-year-old - at the end of the 2015-16 season.

Robson-Kanu starred for Wales at Euro 2016 as the side reached the semi-final stage, where they went out to eventual champions Portugal, and has now set the target of finding a new club.

"We are booked in for talks with him and to see him in the next few days," Bruce told BBC. "Do we intend to offer him a deal? Yes.

"I think Hal is a good age, has had a sort of rebirth if you like, of playing through the middle, because before that he has played wide most of the time.

"He is big, strong, powerful, quick and somebody who runs the other way, in football terms.

"I know we have got competition, so let's see what we can do."