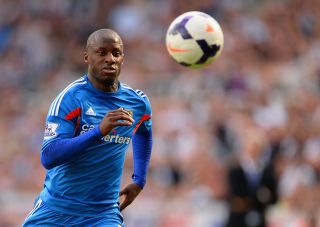 The Nigeria international signed a new two-and-a-half year contract at the KC Stadium last week to ensure he will not leave the club on a free transfer at the end of the season.

The former Rangers man was an integral part of Hull's promotion-winning campaign last term, scoring eight goals in 23 matches, and he has impressed in the Premier League this term.

A calf injury has kept Aluko on the sidelines since October, but his return is imminent and Bruce is relieved to end speculation over the 24-year-old's future.

When asked if he thought Aluko would leave the club, Bruce said: "Yes, at times. Maybe three months ago, I didn't think it (a new contract) was possible.

"But we kept badgering away at him, making phone call after phone call. That's made him realise that he's wanted here.

"I'm delighted that he's committed for another couple of years."

"It could be the most important piece of business we do this month," he added.

"If Sone gets fit over the next couple of weeks, he's a top, top player as we've seen time and again.

"He's a special player for us. I've said that all along, so let's hope we see him doing what he does best in the next month or so.

"I think I can speak for every supporter when I say I'm delighted we've got there now."

Bruce has made no secret of his desire to bring in another attacking player before the January transfer window ends.

Hull sit 10th in the Premier League table with 23 points from their first 20 matches.