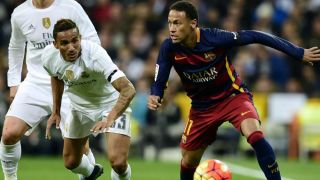 Neymar wearing a Real Madrid shirt could be a possibility in the future, according to compatriot Roberto Carlos.

Lionel Messi was awarded a fifth Ballon d'Or trophy on Monday, with Neymar finishing as the third best player of the world for 2015, behind his Barcelona team-mate and Madrid's Cristiano Ronaldo.

The Brazilian has established himself as an integral figure in the Barca side since his big-money switch from Santos in 2013.

However Carlos - who made over 500 appearances across an 11-year spell with Madrid - says he can see Neymar playing in the Spanish capital in the future.

"Neymar is very young," he told Punto Pelota. "I am sure next year he will finish even higher in the Ballon d'Or.

"I can see one day Neymar coming to Real Madrid."

Carlos also spoke about a return to the club in a coaching capacity to assist former team-mate and new Madrid coach Zinedine Zidane.

"I had a meeting with Real Madrid about my future with the club," said the 42-year-old. "Soon we will know how to collaborate with Zidane's Madrid."