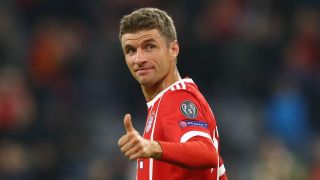 Thomas Muller epitomises the "mia san mia" culture at Bayern Munich and it is hard to imagine the club without the forward, says president Uli Hoeness.

Muller's struggles to fit into Ancelotti's system were demonstrated by the fact he scored just five Bundesliga goals last term and has only one to his name this season.

There was even speculation Muller might consider his future at the Allianz Arena, but the departure of Ancelotti and consequent return of Jupp Heynckes – under who he won the treble – has seemingly ended any notion of that possibility.

And Hoeness talked up Muller's importance, claiming he identifies clearly with the club's 'mia san mia' slogan, which translates as 'we are who we are'.

He told TZ: "I cannot imagine Bayern without Thomas.

"He is part of the mia san mia feeling. You need people like him."