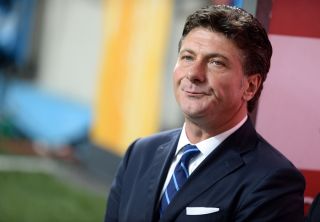 The 52-year-old joined Inter after leaving Napoli in May, and has enjoyed a strong start to life at San Siro.

Inter, looking to re-establish themselves in the top four following a disappointing ninth-place finish last term, sit fourth in Serie A with 14 points from their first seven games.

Mazzarri is happy with life at Inter, and revealed they could be the final club he manages.

"Inter are a great club," he told Tuttosport.

"Living it from the inside, you get the feeling that it's one big family. And that's really nice.

"Let's see what happens here, but I could well be here my whole career."

Mazzarri has been delighted with Inter's form so far, but feels it will be a few years before his side really begins to take shape.

"We have a real group of players here who are trying their all and giving me everything," he added.

"Given what happened last season, we want to be in a European competition.

"This year is almost 'Year Zero' for us. The boys are fighting, and we have seen already that the results are improving.

"I think the real fruits of our labour will be seen in two to three years though. We need to have patience."