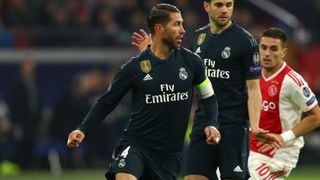 Real Madrid captain Sergio Ramos said he did not purposely pick up a yellow card against Ajax, having earlier revealed that he intentionally received a booking to be available for the Champions League quarter-finals.

Ramos will miss the return leg of the last-16 tie after being booked in Madrid's controversial 2-1 win at Ajax in Amsterdam on Wednesday.

Playing in his 600th match for Madrid, Ramos was yellow carded during the closing stages, ruling him out of the second leg in the Spanish capital on March 5.

Afterwards, Ramos admitted: "Looking at the result, I'd be lying if I said I didn't force [the booking].

"It is not to underestimate the opponent nor to think that the series is over, but in football you have to make tough decisions."

However, Ramos backtracked from his original comments after tweeting post-match.

In a post via Twitter, Ramos wrote: "I want to make it clear that it hurts more than anyone, I have not forced the card, as I did not against Roma in my previous Champions League match.

"I will support from the stands as one more fan with the illusion of being in the quarters."

Ramos became the seventh player to reach 600 games for Madrid in all competitions, behind Fernando Hierro and Paco Gento on the list, with the top four comprising Santillana (645 games), Manuel Sanchis (710), Iker Casillas (725) and Raul (741).

But it's more than just 600 games. It's a life in white. Thanks for coming with me.
What I could never have imagined and what lies ahead. Always on the front line, always hungry for more.#HalaMadrid@realmadridenhttps://t.co/zyUDQcTZIo— Sergio Ramos (@SergioRamos) February 14, 2019

"I've got a lot of memories. It has involved massive sacrifices and constant effort over the course of many years," Ramos said. "It's no mean feat to make 600 appearances for my club and let's hope that I'm able to enjoy many more.

"I want to thank everyone for the affection and support they give me, which means that I wake up every day with the desire to continue improving and representing this team as captain."