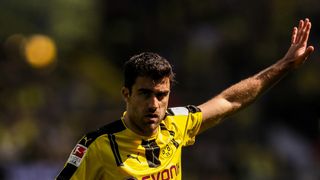 Sokratis Papastathopoulos has hinted he could seek a move away from Borussia Dortmund in a bid to win more titles.

Dortmund had to win on the last day of the Bundesliga season to guarantee a place in the Champions League, finishing the season 18 points behind Bayern Munich as they retained the title.

Sokratis and Dortmund will have a chance to end the campaign on a high in Saturday's DFB-Pokal final against Eintracht Frankfurt, but the centre-back suggested he could leave the club.

"I want to play until I'm 33 or 34," Sokratis told WAZ.de. "But I have not thought about whether this will be here or elsewhere. After the end of the season there is enough time to think about the future.

"There is something I have been missing. If you are young, you have a lot of time to get something. But I'm no longer young, I've got a lot of time for myself - and I really want to win a title.

"However, it is too early to talk about the new season. In the summer, so much can happen, players go, players come."

Tuchel's future is also in doubt but Sokratis would not comment on reports he has fallen out with the Dortmund coach.

"We must concentrate on our work." the Greece international said. "After the final, we have enough time to talk about these things."