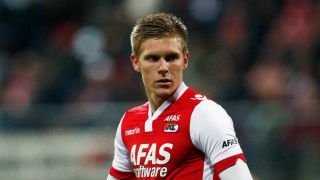 Aron Johannsson wants to play in MLS "at the peak" of his career, with the international striker wary of the expectations put on United States internationals in their home league.

Johannsson, who has been named in the USA's squad for the upcoming CONCACAF Gold Cup, plays for AZ in Netherlands, where he has scored 29 goals in 60 league matches.

Although the majority of players and fans see the MLS as a retirement league, the Iceland-raised forward rates the competition highly and knows he will be expected to thrive if he does play in the USA as a 'home-grown' player.

"I've said it a lot of times. I hope just the opportunity comes," the 24-year-old told ESPN Radio.

"I want to, when I'm at the peak of my career, then I want to be playing in the MLS, because I don't want to go there when I'm getting too old and the expectations are too much and I can't handle it.

"So when I'm playing at my best level, I want to be able to play in the US and show people how good I am over there."

Johannsson is one of four forwards in Jurgen Klinsmann's 23-man squad for the Gold Cup, which begins on July 7, alongside three MLS-based team-mates - captain Clint Dempsey, Jozy Altidore and Chris Wondolowski.

In 12 appearances for the USA, Johannsson has scored three times.