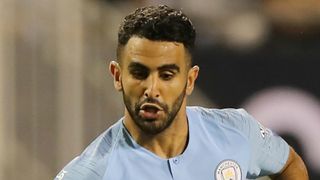 Riyad Mahrez admits Pep Guardiola's presence was a key factor in his decision to sign for Manchester City - and he hopes to win trophies "every season" with his new club.

The 27-year-old joined the Premier League champions from Leicester City for a reported fee of £60million, making him the club's record signing.

Mahrez helped his former club win promotion from the Championship in 2013-14 and then became a Premier League winner under Claudio Ranieri two season later, but that was to be his last taste of silverware at the King Power Stadium.

While preparing for friendly matches against Liverpool and Bayern Munich in the International Champions Cup, the Algeria international revealed Guardiola's winning habit drew him to City.

"I'm an ambitious player, I want to win trophies every season," Mahrez told the media. "I think Manchester City is a club who try and have ambition to win every season.

"It's a big club, the football they play is amazing, with a big manager. That's why I'm here."

Guardiola took a season to adjust to life in England but secured both the league title and the EFL Cup in 2017-18, and Mahrez has already been impressed by the Spaniard during their short time working together in training.

"He's very ambitious," said Mahrez. "He wants to win everything. He works very hard in training on small details.

City's Portuguese midfielder Bernardo Silva, who will be battling with Mahrez for a place in Guardiola's starting line-up, said his new team-mate has nothing to prove.

"Everyone knows the way he plays," Silva said of Mahrez.

"He's a fantastic player who can improve our team. To have him with us, it's great.

"In the Premier League he has shown how good he is and we hope this season he can do the same."