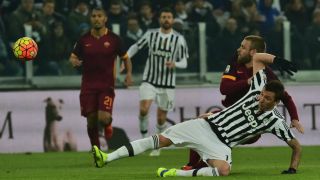 De Rossi has been accused of calling the Croatia international "a f***ing gypsy" during Roma's 1-0 defeat, but Spalletti has stressed the midfielder was provoked by Mandzukic ahead of the incident, adding that the Juventus man insulted his opponent as well, but covered his mouth while doing so.

"Mandzukic had been taking the p*** out of everybody for 10 minutes and nobody told him anything.

"I'm going to tell my players to do like him and to cover their mouths so you can't lip-read.

"De Rossi just replied to what his opponent said to him.

"He needs to behave better, but when you are losing you may lose your temper and forget to cover your mouth, keeping your hands close to your body instead of covering your mouth. We will teach him that."