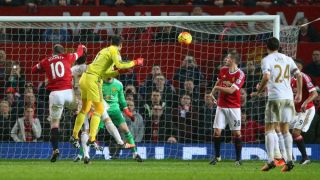 Swansea City caretaker manager Alan Curtis concedes he wishes he had allowed goalkeeper Lukasz Fabianski to go forward for a corner earlier in the 2-1 Premier League defeat to Manchester United.

The Poland international came agonisingly close to netting a stoppage-time equaliser at Old Trafford, after Wayne Rooney had scored the eventual winner with a wonderful flicked finish.

And Curtis subsequently revealed Fabianski had already asked to go up for a corner only to have his request turned down by the Swansea bench.

"We almost got something out of the game," he said. "Funnily enough, Lukasz Fabianski had asked a couple of minutes earlier to go up for a similar situation. I told him to stay back. I wish I'd asked him to go up earlier."

Anthony Martial opened the scoring shortly after half-time, before Gylfi Sigurdsson equalised with a looping header.

Modou Barrow - brought off the bench after Swansea went behind - supplied the cross for the Iceland international, and Curtis hailed his players' second-half display.

"We had to get back into the game," he commented. "We were comfortable with the midfield diamond when it was 0-0, but once we went behind, we had to change things, so we put two wingers on to get back into it.

"We were a little disappointing in the first half, as we didn't keep the ball well.

"We grew into the game after that and we were unlucky not to get something."

Discussing his rare foray into the opposition box, Fabianski added: "I had a really good contact on the ball with a clear header and was just hoping it would squeeze in but unfortunately it went wide. It was a little bit unlucky."