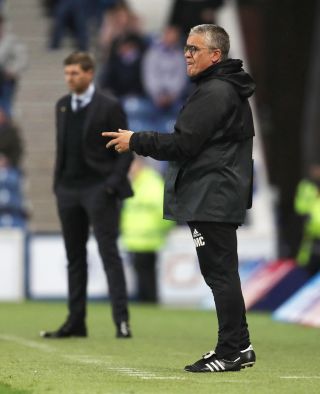 Ayr boss Ian McCall hit out at referee Alan Muir for two decisions which left the Honest Men’s play-off hopes hanging by a thread after a 3-1 defeat to Inverness.

But McCall was left furious at the display of Muir and his assistants, claiming they failed to spot a clear offside in the build-up to White’s first strike and got the penalty decision that handed him his second wrong after Mark Kerr was penalised for a push on Jamie McCart.

A furious McCall said: “It’s disappointing because we played a lot of good football.

“Referees get a hard time but I’ve watched the video and their player was a yard offside at the second goal and it was also never a penalty kick. But we all make mistakes so that’s fine.

“It’s really disappointing in a big game like that to get decisions like those. They are two pretty obvious decisions.

“We’ll go up there and have a real go and, if we can score first, who knows? It’s game on if that happens – but we need to score first up there.”

Inverness boss John Robertson was delighted with his side but warned them not to let complacency wreck their progression chances ahead of the second leg on Saturday.

He said: “The boys have to be congratulated on a job well done tonight but it’s only tonight. We’ve got to go back to Saturday and regroup. Play exactly the same, with the same intensity, quality and passion and be clinical.

“If we do that then we’ve got a chance but we’re taking nothing for granted. The warning is quite simple – just look at what Ayr did to Dundee United.

“They demolished them 5-0 and that’s what they’re capable of and we’ve got to be on our guard. This tie is far from over.”