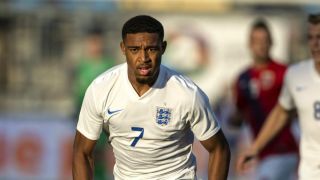 Liverpool winger Jordon Ibe remains committed to playing for England, with Nigeria coach Sunday Oliseh claiming his overtures have been knocked back.

While England coach Roy Hodgson insisted he will not select Ibe just to avoid the 19-year-old switching allegiances, it appears the Liverpool youngster will not turn his back on the country of his birth to play for Nigeria.

Oliseh wrote on Twitter on Sunday that Ibe was focused on earning a senior call-up with England: "Jordon Ibe's Family Informed me by a Telephone call, that He was giving priority to an England call up. We wish them well."

Nigeria have been attempting to recruit Ibe, who qualifies to play for the African nation through his father, but the London-born winger remains unmoved.

Ibe has represented England at Under 18, U19, U20 and U21 level, with the highly-rated teenager having played in England U21's first qualifying match for the 2017 UEFA U21 Championships on September 7.

But if Ibe begins to use Nigeria as a bargaining chip to earn senior selection with England he will get short shrift from Hodgson, whose comments may indicate Aston Villa youngster Jack Grealish - who is also coveted by Republic of Ireland - will need to do more for an England cap too.

"But my attitude for that is quite clear – I want players who want to play for England. I am not going to start making players English by giving them a few minutes in games.

"It's far from impossible that he gets called up in one of the next games. But if we do call him up it won't be because we are worried about other nations.

"We're England. And when it gets so bad that we can't get enough players who want to play for England, who want to put the England shirt on, then we are in a difficult period.

"Many years ago Steven Gerrard mentioned Jordon. He wasn't at Liverpool when I was there but Stevie, in one of the get-togethers, said we have this young lad who's something special.

"He had the same feeling about Raheem Sterling too."