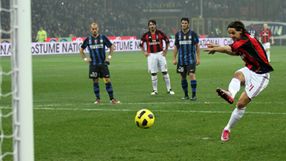 The chances of Inter winning an unprecedented sixth successive scudetto were greatly reduced by Ibrahimovic's fifth-minute penalty after the Swede was recklessly fouled by Inter's ageing defender Marco Materazzi.

Just 12 games into the season Milan look favourites to win their first title since 2004, given their six-point advantage over fifth-placed Inter and the continuing brittle form of the treble winners.

Coach Massimiliano Allegri triumphed in his first derby despite having right back Ignazio Abate sent off with half an hour left and the pressure intensified on his Inter counterpart Rafael Benitez, also overseeing his first all-city clash.

"We put in great work and great sacrifice in the second half with a man down, we played with huge heart," Ibrahimovic, who accidently injured Materazzi in a second-half clash, told Sky.

"There are lots of games to go and there is a bit of an advantage but we'll play each game as it comes."

The defeat in what counted as an Inter home game in the shared San Siro, packed with 80,000 noisy fans, was the champions' first home league loss in over two and a half years.

Milan, who substituted the pumped-up Gennaro Gattuso at the break to avoid a dismissal but left Ronaldinho on the bench, had the better chances with Ibrahimovic spectacularly volleying over to remind Inter fans of the skill he used to wow them with.

Injury-hit Inter started with a new 4-3-1-2 formation but they failed to gel and Benitez was soon regretting the inclusion of 37-year-old Materazzi for his first league appearance this season.

Olympic sprint champion Usain Bolt watched on in the stands but Inter lacked pace and urgency despite decent pressure in the latter stages.

A controversial Mauro Zarate goal helped second-placed Lazio, a point behind Milan, recover from two straight defeats with a 2-0 win over Napoli.

Argentine Zarate appeared to use an arm when he grabbed the opener on 15 minutes before fellow striker Sergio Floccari doubled the lead in the second half from a Zarate assist.

Third-placed Napoli had seen the game as a key test for their title credentials but failed to impose themselves.

Sampdoria drew 0-0 with Chievo to slip to 10th after again missing the influence of forward Antonio Cassano, dropped by the club for swearing at the president and facing an arbitration hearing soon on his future at the Genoa-based side.

Samp have scored once in five games since his suspension.