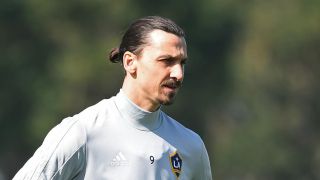 Zlatan Ibrahimovic says he is available immediately to make his LA Galaxy debut after joining the MLS club from Manchester United.

Ibrahimovic completed his move to MLS after United agreed to cancel his contract early, with the 36-year-old in line to appear against city rivals Los Angeles FC on Saturday.

The Sweden striker has been unable to play in 2018 due to injury but feels fully fit and ready to make an impact at his new club.

"I am available," Ibrahimovic told reporters at his first media conference on Friday. "I have so much adrenaline it can hold a long time, but the condition I don't know, let's see.

"We start step by step. I'm not here only for one game, it's for the season and another, so the coach wants to build it up and make me feel comfortable, settle in.

"I'm here and available, I want to play. I think the club is more like, step by step, but I feel like a child with candy for the first time chasing around, that's me with the ball now.

"I respect every decision, the coach is the boss."

Galaxy coach Sigi Schmid gave no indication over whether Ibrahimovic would play on Saturday, but he is thrilled to welcome the Swede to LA.

"Obviously as a coach I'm excited," said Schmid. "The reason I came back is due to the ability of this club to do things like this.

"Ibra is a player I look up to - mostly because he's taller than me - and due to all of the achievements and titles he's won.

"When you can add a piece like that to your team it makes everyone stronger. I'm looking forward to our relationship and working together, he could have selected many options but he chose us and I'm very proud of that.

"I'm just looking forward, as we all get to know each other, to have great success on the field and return the MLS Cup to LA."