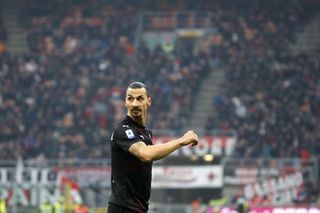 Zlatan Ibrahimovic failed to inspire AC Milan to victory on his return to the club after emerging from the bench in a 0-0 draw with Sampdoria at the San Siro.

The former LA Galaxy striker signed a six-month contract with Milan, whom he played for between 2010 and 2012, last month and was named as a substitute on Monday.

Ibrahimovic replaced Krzysztof Piatek for the final 35 minutes – 2,794 days since his last Serie A appearance on 13 May 2012 – but could not find a winner for the hosts.

The 38-year-old had two chances to break the deadlock but saw one header well saved by Sampdoria goalkeeper Emil Audero and another effort cleared off the line.

Cristiano Ronaldo scored his first Serie A hat-trick as Juventus returned to the top of the table with a 4-0 victory over Cagliari.

The Portugal captain pounced on a mistake from Ragnar Klavan to open the scoring just after half-time for the hosts.

Ronaldo then converted a 67th-minute penalty after Paulo Dybala was fouled in the area and Gonzalo Higuain added a third in the 81st minute.

The final act was left to Ronaldo, though, who slotted under the onrushing Robin Olsen to take his Serie A tally for the season to 13 in the closing stages.

Inter Milan could return to the top of the standings if they beat Napoli in the late game at Stadio San Paolo.

Josip Ilicic scored twice as Atalanta kept up their pursuit for Champions League qualification with a 5-0 victory at home to Parma.

Riccardo Orsolini’s added-time equaliser rescued a 1-1 draw for Bologna at home to Fiorentina, who had led courtesy of Marco Benassi’s 27th-minute goal.