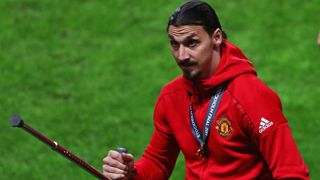 Manchester United striker Zlatan Ibrahimovic has a "minimum" of five or six years left as a player, according to his agent Mino Raiola.

Ibrahimovic enjoyed a wonderful first season at United before suffering serious knee ligament damage in April, an injury which is expected to keep him out of action for the rest of the year.

Despite that setback and his lengthy rehabilitation, United opted to offer him a new one-year deal and it was confirmed in August that he was to remain at the club for this season.

Although it remains to be seen how the 36-year-old fares upon his return, Raiola is adamant that he could play into his 40s, before joking how they are going to change their relationship in terms of finances.

"He has so much in him," Raiola told Expressen. "I think minimum another five or six years. I won't let him stop, he has to work for me now.

"I have been working for him for several years, now it's my turn. My children are grown up and I need money.

"We have agreed that he is only working for me for five years now. So we're flipping it now. The salary comes to me and he gets the commission."

It’s nice to be important but it’s more important to be nice October 13, 2017

Raiola expects to continue to have a close bond with Ibrahimovic when he does eventually retire, though he does not necessarily think the striker will make a particularly good coach.

"He will always be in my life if he is a football player, carpenter, investment banker, director or coach," he added. "It does not matter. But ****, God help the one who gets him as a coach.

"I want to see the player saying Zlatan does not know what he is talking about. If there is a meeting when Zlatan finds someone who thinks he's better than him, I want a hidden camera."

United have not set a specific return date for Ibrahimovic, but Raiola is certain that he is making great progress, even claiming that Dr Freddie Fu – the doctor overseeing his rehab – wants to study his knee because it is 'the best' he has seen.

"He says he has never seen such a strong and pure knee after such a long career as Zlatan has. Imagine all the bangs [his knee has received].

"This is a professor who takes care of athletes from all over the world and works with an American football teams.

"He says he has never seen anything like 40 years. It's the best knee he has ever seen. This damage would be Himalayan to many, but to Zlatan it's a small hill. He will be back soon."