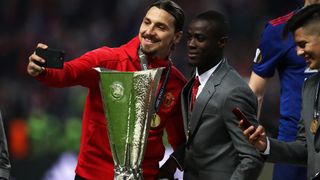 Manchester United star Zlatan Ibrahimovic was non-committal over his future after watching his side win the Europa League.

Sidelined with a knee injury, Ibrahimovic watched on as United claimed a 2-0 win over Ajax in Wednesday's final in his native Sweden.

Ibrahimovic, who is yet to sign a new deal for next season, said he was nearing a return, but just where he will be playing remains unclear.

"In a few weeks I'll be back in the field," he told Sky Italia.

Ibrahimovic, 35, scored 28 goals in all competitions for United this season, defying critics who suggested he would struggle in England.

The former Sweden international was pleased to see his team add to the Community Shield and EFL Cup crowns they had already secured this season.

"When you win, you are always good, you don't feel even more pain," Ibrahimovic said.

"I regret not being able to play this game. It is normal, I wanted to be on the pitch but the situation is this.

"I had a different role, I supported the team, but what matters is that we won. That's the most important thing because this is a collective trophy.

"You win and lose together. Now we raised another trophy, which is the third this year of the five available."