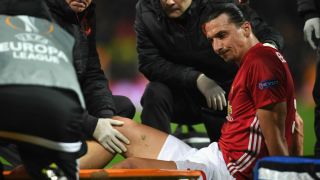 Manchester United star Zlatan Ibrahimovic has undergone successful knee surgery and will make a full recovery, according to his agent.

Ibrahimovic, 35, suffered the injury during a Europa League clash against Anderlecht last month, sparking fears it could be career-ending.

In a statement on Monday, the Swede's agent Mino Raiola said the procedure had been a success.

"He will make a full recovery AND HAS NOT SUFFERED A CAREER-ENDING INJURY.

"The procedure was performed by Freddie Fu, M.D., and Volker Musahl, M.D., of the UPMC Sports Medicine program in Pittsburgh.

"Zlatan has started rehabilitation at UPMC and will remain under the care of Dr. Fu and Dr. Musahl throughout his recovery."

Ibrahimovic has been a standout in his first season at United, scoring 28 goals in all competitions to silence his critics.

United sit fifth in the Premier League and are in the semi-finals of the Europa League, facing Celta Vigo in their last-four tie starting Thursday.