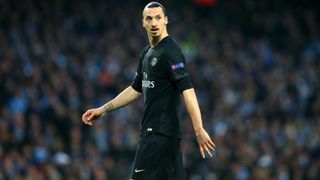 Sweden legend Henrik Larsson has backed Zlatan Ibrahimovic to help Manchester United back to the top after three underwhelming seasons.

After winning the title in 2013 at the end of Alex Ferguson's final season in charge, United have finished seventh, fourth and fifth, with Jose Mourinho replacing Louis van Gaal ahead of 2016-17.

Ibrahimovic left Paris Saint-Germain in favour of a move to Old Trafford and Larsson - who had a brief loan spell at the club in 2007 - has little doubt his compatriot will make a major impact in the Premier League.

"I think everybody has seen him play but, for a man that big to have the technique he has and the skills he has, it's a pleasure to watch," Larsson told the official United website.

"So I have to hope everything goes well now when he comes to Manchester United. Hopefully, he can bring United back to where it belongs.

"I don't think his age could be an issue. He's a fit guy. He takes care of his body so that won't be a problem. He's fit and he likes to train. You have got a great physical department at United as well so I'm sure everybody is going to make it happen in the best possible way for the club.

"I hope everything goes well because United deserves it and he deserves every good thing that is happening to him.

"He's Sweden’s biggest footballer ever. Zlatan is gigantic in Sweden. He is the number one. Everyone knows of him and everyone knows about him."

Ibrahimovic, 34, could make his United debut in Saturday's friendly against Galatasaray in Gothenburg.