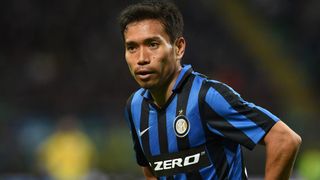 Mauro Icardi was absent once again as Inter were held to a 1-1 draw by Estudiantes in their friendly fixture on Wednesday.

Inter captain Icardi has been the subject of plenty of transfer speculation in recent days, with Napoli reportedly keen to sign him as a replacement for the departed Gonzalo Higuain.

The Argentine did not feature in Inter's loss to Paris Saint-Germain on Sunday and was left off the team sheet once again in their clash against Estudiantes in New Jersey.

However, Inter took the lead in just the fifth minute of the contest without their skipper, with Yuto Nagatomo finishing off Rodrigo Palacio's cross.

The Japanese defender almost scored an identical goal two minutes later, but this time failed to find the target as Inter piled on the pressure early.

Stevan Jovetic had a strike fly over the bar before Palacio hit the woodwork, but Estudiantes found an unlikely equaliser just before the half-time break.

Juan Cavallaro whipped in a dangerous free-kick that was headed home by an unmarked Leandro Desabato, with Inter's defence leaving a lot to be desired.

The second half saw an abundance of substitutions made from both sides, but neither could find the net in a goalless 45 minutes.

Inter take on Bundesliga giants Bayern Munich next up in the International Champions Cup on Saturday.