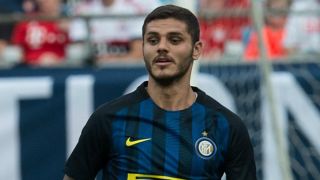 Inter captain Mauro Icardi claims he knows little about his future as he continues to be linked with a move to Napoli.

The San Siro side's president Erick Thohir has confirmed the 23-year-old has already been the subject of a rejected bid from last season's Serie A runners-up as they look to replace new Juventus striker Gonzalo Higuain.

Icardi – who has also been linked with Arsenal - came off the substitute's bench and scored his first goal of pre-season as Inter suffered a 4-1 defeat to Bayern Munich in Charlotte on Saturday.

But the striker revealed he was not up to date on the latest speculation on his future amid reports in Italy suggesting Napoli are preparing to return with a new €70million offer and rumours that his wife and agent Wanda Nara will be offered a movie role by Aurelio De Laurentiis.

"There have been a lot of rumours over recent days," Icardi told reporters after the defeat to Bayern.

"The truth is that I have been a long way from home for a month, so I'm not very informed about what is happening.

"The criticism? People looking from the outside can think whatever they want, I am staying calm."

He told Premium Sport: "I would certainly be sorry to see Icardi leave because he is a great player.

"I have seen him look calm in recent days, so I don't know anything about what is happening, but I truly hope he stays with us."