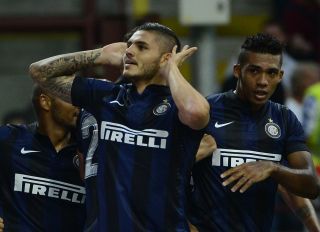 The 20-year-old made the switch to Inter from Sampdoria during the close-season, and opened the scoring against the Serie A champions on Saturday after coming off the substitutes bench with just over 20 minutes left to play.

Walter Mazzarri's side were then immediately pegged back when Arturo Vidal levelled the scores just two minutes later.

But Icardi, who has already scored four times against Juventus in his fledgling career, was delighted to get off the mark for his new club and admitted the supporters' reaction made the moment even more special.

"The noise from the fans was incredible when the ball went in," the Argentinian told Inter Channel.

"It was so loud. I hope it continues like this.

"It was wonderful, scoring my first official Inter goal and to get it against Juventus too."

Icardi also praised strike partner Rodrigo Palacio, and is happy to be linking up with his compatriot..

"Rodrigo Palacio is someone who moves very well, so I like playing by his side," he added.