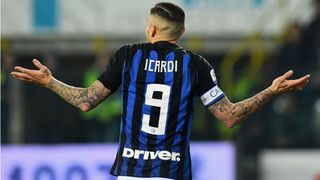 Inter coach Luciano Spalletti has revealed Mauro Icardi chose not to join up with the squad for their Europa League clash with Rapid Vienna.

The Serie A club named goalkeeper Samir Handanovic as their new captain on Wednesday but did not give any reasons for Icardi's removal from the role.

The Argentina international was later a notable absentee when the club named a 19-man party for the trip to Austria for the first leg of their last-32 tie on Thursday.

But Spalletti said Icardi has not been dropped and that his absence from the squad was the player's decision alone.

| #Spalletti: "All of our attention is now on tomorrow's game, one that is extremely important." #RapidInter#UEL#FCIMpic.twitter.com/frO4yKv0WZ— Inter (@Inter_en) February 13, 2019

"Tomorrow will be a very important game. We'll have time after that to clarify Icardi's position," he told Sky Sport Italia.

"It was a difficult and painful decision but one supported by everyone and made for the good of Inter and the team.

"His no-show? It was him who didn't want to join up with the team. He was called up. He was disappointed, but it was also difficult for us to make this decision and announce it to him.

"There's a situation that needs addressing and I said it after [the] Parma [game]. What's happened confirms that.

"If there is anyone who thinks of anything other than the result tomorrow night, they're wrong to do that.

"We've made a decision at an appropriate time and one that was well thought out, albeit one that was very painful.

"Things around him have disturbed him and the team he captained. Now we have to focus all our attention on tomorrow’s game."

Icardi has a contract with the Nerazzurri until 2021 but continues to be linked with a move away, with Barcelona, Real Madrid and Manchester United all previously credited with an interest in the striker.

However, that has done little to assuage doubts over his future, and the situation became more unclear when Nara, speaking on the Tiki Taka show, said: "I would like Mauro to be more protected by the club because sometimes some bad things come from inside."